Utility locators in Canada are no strangers to harsh weather conditions. They work rain or shine, snow or sleet. In the past year however, there have been an increasing number of extreme weather events. This uptick has impacted utility locating technicians and their ability to perform accurate utility scans.

In BC alone, ‘atmospheric rivers’ have resulted in catastrophic flooding in the Fraser Valley and other low-lying regions throughout the province. Earlier in the Summer, temperatures reached record highs, as the province experienced a ‘Heat Dome’ brought on by a high-pressure weather system. These extreme weather patterns had devastating effects on people’s lives, property, civil infrastructure, and the environment itself.

This article will look at the various tools and technology that utility locators use and examine the pros and cons of each one in the face of severe weather conditions.

What are Electromagnetic Locators?

One key aspect that allows this process to work is the fact that the earth (soil) is often used as a return path for the signal to create a circuit. For this technique to work the earth (soil) must work as a return path for the signal transmitted to create a circuit. This is where extreme weather events can play a role. In order for the earth to be used to complete the circuit it must be conductive. Different soil types have a range of different electrical conductivity. For example, clay and loam is generally more conductive than sand and gravel. The conductivity can also vary depending on the water content of the soil. Generally speaking, more water results in higher conductivity and less water results in lower conductivity.

In times of extreme drought when the water content of the soil is very low, it may be difficult to create a circuit on a conductor. The utility locating technician will have trouble locating the line, increasing the chances of missing it altogether. Another potential outcome is that other conductive utilities may be used as a return path for the signal, which could be mistaken for the intended line. This is often referred to as bleeding or jumping signals.

Ground penetrating radar is being used increasingly more frequently in utility locates across the country and is standard practice for GeoScan. The GPR is especially useful in identifying non-conductive lines that do not have a tracer wire, such as water and sewer lines. GPR scanning is extremely advantageous when locating abandoned or newly installed lines that may not appear on utility records or have access points.

The basics of GPR involve electromagnetic waves from the microwave band being transmitted into the ground by an antenna. Those waves are then reflected back and detected by the receiving antenna. The properties of the wave change depending on the characteristics of the material they reflect off of. It is then up to the utility technician to interpret these results. GPR antennas come in a range of frequencies, generally 300MHz to 500MHz is used for utility locating. The lower the frequency the greater the depth penetration however, the resolution is reduced. 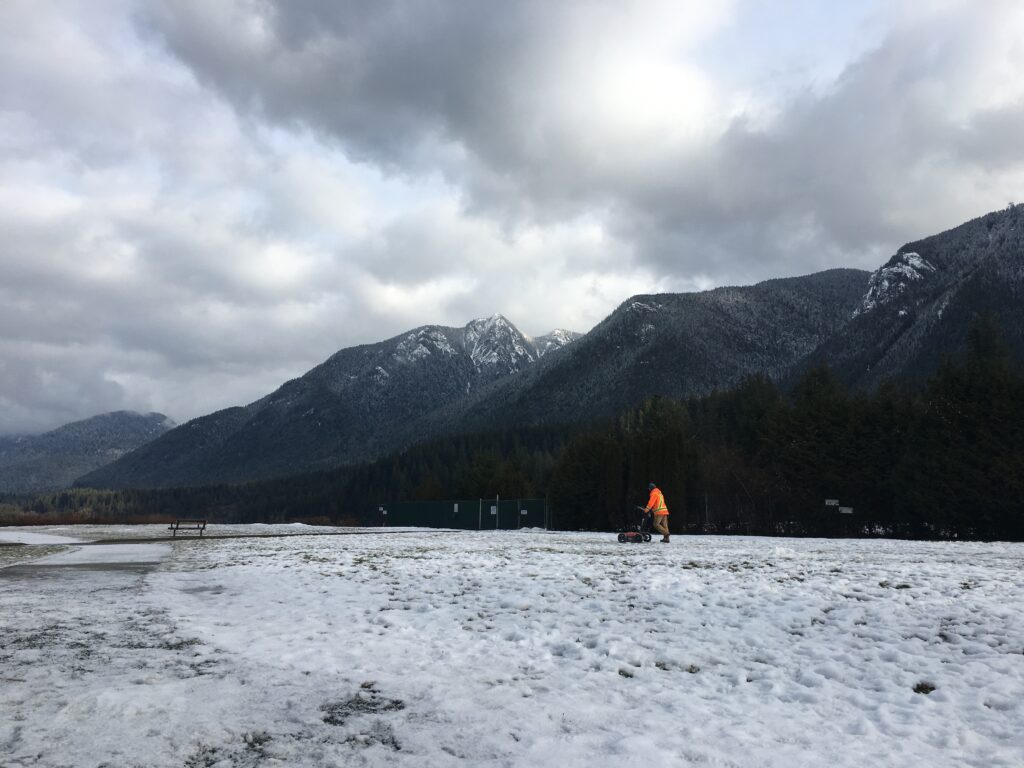 In general, materials that contrast in conductivity compared with their surroundings create  strong reflections. These can then be easily identified by a technician. However, the electromagnetic waves can only penetrate the ground so far depending on the dielectric properties of the surrounding materials. For example, the GPR signal cannot penetrate through a steel plate as it has an infinitely high dielectric constant. It can penetrate much deeper in dry sandy soils which have a low dielectric constant compared to saturated soils. This is where heavy rainfall and water-logged conditions can affect the performance of the GPR. If the soil is extremely saturated, the GPR may not be able to penetrate deep enough to identify certain utilities.

These issues can create significant challenges for a locate technician, but thankfully both issues don’t happen at the same time. As a measure of best practice, and regardless of weather conditions, GeoScan technicians use both EM and GPR on every utility locate project.

If you’re in need of utility line locating services, subsurface utility engineering, or underground oil tank locating, please give us a call at (604).436.7226 or leave us an enquiry through our contact page.