MASW is based on the dispersion of the Rayleigh surface waves. Through several processing steps a shear-wave velocity distribution of the subsurface is generated. Variations in the shear-wave velocity can indicate the interface between various strata. This helps to identify the depth of bedrock, locating areas with soft soil, clay pockets or mapping voids. 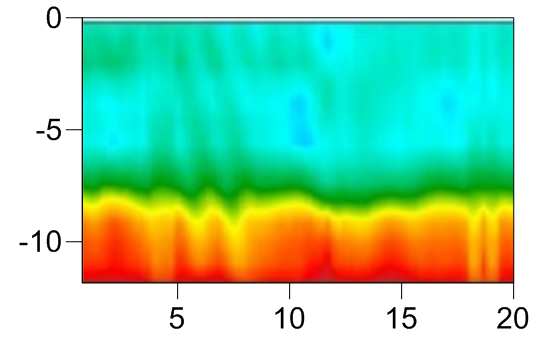 A snapshot of a MASW result profile above show clear indication of different layers, indicative of shallow bedrock (red) beneath the quarternary sediment (blue).

Refraction and reflection seismic traditionally regard the surface waves as coherent noise and a burden on the useful data, however, these surface waves can be very useful if the investigation is focusing on the top 30m of the subsurface.

The data collection usually is undertaken in 2D profiles. Multichannel seismographs are placed equally in a line to measure ground vibrations. For each record in the line, a dispersion curve is generated which is turned into an estimated shear-wave velocity curve by the inversion process. Once this step is completed for each of the record, a 2-dimensional velocity profile is generated.

Application of the MASW includes:

By carrying out several 2-dimensional profiles, it is possible to create a quasi 3-dimensional (usually referred  as 2.5-dimensional) survey through an entire site to complete a site characterization.