Locating abandoned and dormant oil and gas wells has been an issue since the first wells appeared back in the 1940s.

As a result plans have been announced to clear-up more than 2,000 wells across the province (mostly in Northern BC), and further projects to follow in Alberta and Saskatchewan.

B.C. has about 25,000 oil and gas well sites. About 7,700 are dormant, meaning they have been inactive for five consecutive years and are deemed unlikely to return to service. Therefore the priority is now to return that landscape to its natural state by locating the wells, then removing contaminated soil and replanting trees.

Who do these wells belong to?

The majority of these orphan wells have current owners who have simply neglected to clear up after their work is complete, resulting in B.C.’s Auditor General repeatedly calling on the oil and gas industry to “clean up its act”. Part of the enormous project is also allocated to orphan well sites whose owners have gone bankrupt or simply can’t be found. An example of which is Ranch Energy, who recently went bankrupt, adding 300-400 wells to the list.

What methods are used to locate an abandoned oil and gas well?

Depending on the objective of the survey, there are primarily three survey methods used to locate abandoned oil and gas wells and/or conducting preliminary investigations of its surroundings. Most of these methods have been proved to be useful since the early 1980’s.

The first and probably most important survey is an aerial photometry, which could help to reduce the area of interest by searching for any signs of previously operating wells or its leftover signatures. Wells operating for a long period of time leave surface signatures such as breaks or changes in vegetation and/or breaklines in natural topography.

Magnetometry is typically used to locate ferromagnetic materials in the subsurface. Steel casing, whether cemented or uncemented, has a very distinguishable magnetic signature that advanced fluxgate gradiometers can pick up even if the well is buried. Furthermore, due to the long length-to-diameter ratio, their specific magnetic signature typically can be distinguished from other small ferromagnetic material if scattered around the site.

Electromagnetic surveys can also pick up abandoned wells with steel casing. These conductivity sweeps are fast and effective up to 6m deep and can provide additional information regarding possible contamination associated with the well.

GPR is widely used in subsurface investigations as the primary method due to its high vertical resolution and great imaging capabilities. However, it has limitations when it comes to locating wells. Using GPR alone may take significantly longer than using a combination of the other methods mentioned above. GPR swaths, or ‘B-scan’ profiles, have a very small footprint (essentially providing two dimensional cross-sections), making the method less favourable when locating a point-type feature, such as an abandoned well. On the other hand, GPR excels in accurately measuring the depth to the top of a buried well cap, once the location is identified.

In the end GPR can verify the depth and accurate position of the located feature before exposing it.

What process provides the best results?

GeoScan established a protocol that assures proper procedures based on previous studies, historical research and in-house experiments.  The survey procedure begins with aerial photometry and a quick on-site image analysis of the area. Depending on the findings and the objective of a specific project, magnetometry and/or electromagnetic methods with tight grid line spacing (0.5m-1m) is used to survey the area. GPS or local spatial referencing is used to achieve the highest accuracy.

If the aerial photometry or the visual inspection reveals locations with high probability of finding the abandoned well, a single channel magnetic detector can be used to locate the well in real-time. In this case, no data is stored and the cost of the survey can be reduced significantly.

If you need any further information on GeoScan’s subsurface void location service click here. For enquiries on this topic please get in touch. 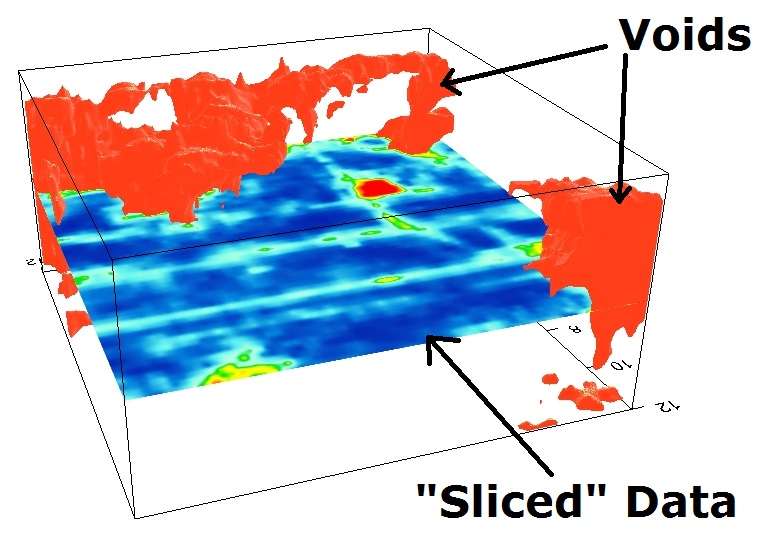