Sinkholes and subsurface voids can develop gradually or form suddenly

They can be found all over the world and occur anywhere that the subsurface conditions are just right for their formation. Locating voids & sinkholes needs specialist skill.

Problems caused by hydrogeological, geochemical processes, unstable subgrades, flooding, or collapsed or leaking pipes, can all lead to the formation of voids & sinkholes. The impact of a sinkhole can be incredibly damaging and costly, so it is important to conduct void surveys in suspect areas.

What is a sinkhole?

A sinkhole is a depression or hole in the ground caused by the collapse of the ground surface layer. They can vary in diameter, depth and form, in addition to being soil-lined bowls, or even bedrock-edged chasms.

How do sinkholes form?

Sinkholes mainly occur in what is known as “karst terrain”, which is an area of land where soluble bedrock (such as limestone of gypsum) can be dissolved by water. Rainfall passes into the subsurface and moves through spaces and cracks underground, slowly dissolving the bedrock causing the formation of cavities and voids.

A sinkhole is formed when the land surface above the void collapses or sinks downwards, creating a hole. While they can occur naturally, they are often triggered by human activities such as:

Areas showing surface signs of subsidence such as cracks or depressions, could be harbouring voids below. A range of methods can be used to detect the presence of voids. GPR presents a fast and effective way of identifying shallow voids in a non destructive manner. The difference in electrical properties between air (i.e. a void space) and the surrounding subgrade, soils or concrete provides a clear contrast in radar imaging and therefore relatively straightforward interpretation.

Twinning this method, where appropriate, with ground resistivity and/or electromagnetic profiling widens the understanding of a suspected void site and can give insight into how and why voids may have developed – vital information for planning effective mitigation and longer term repairs.

What to do if voids and sinkholes are detected

With sinkholes it’s important not to wait until the collapse occurs.

If you suspect an area is at risk from subsurface voids then contact one of our technicians who will perform a thorough scan of the area, giving you a report of any and all subsurface voids and cracks in the subsurface. 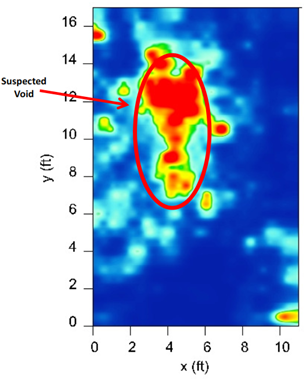 A suspected void mapped out within a report